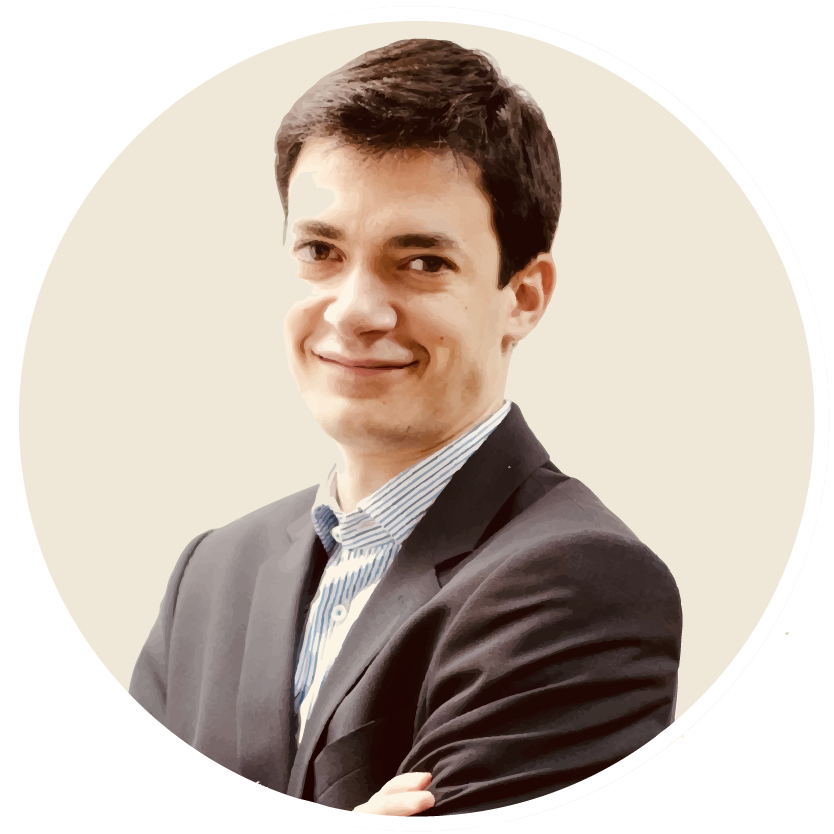 Many advertisers base their advertising partners performance evaluation on the results they see. The problem comes when those results hide the real contribution of each one of them, as you can see in this example below.

We at mediasmart were granted access by one of our clients to all of its partner results in their MMP (Mobile Measurement Platform). We found this:

We had found that 2 of the partners the advertiser is working with (partner 1 and 8 – the orange ones in the table) are doing click flooding/spamming. How do we know this?

Let’s have into account that when you serve an impression, you are at least exposing a user to a brand. When you just count a click, you have no proof whatsoever that the customer has been exposed to your brand… The more clicks (which seem to cost nothing) the more chances of “stealing” conversions.

If you think about attribution being just a math game, the incentive of click flooding for an advertising channel is to increase the chances of attributing a conversion to its campaigns by generating as many clicks as possible. That conversion would have happened anyway (because it is organic or generated by other channels) and the advertising channel just happens to count a click for that user before the user opens the app.

What does it mean to the advertiser? More and more budget is given to partners that “steal” conversions from both a) other partners - that money should have been given to the other partners - and b) organic conversions - that money should literally not be spent. Advertisers think these channels are a no-brainer, because they pay CPI, but they do not realize that they are paying for installs they would have gotten anyway. In other words, they are wasting their money.

The impact on the advertiser

The advertiser in this example wants to grow, get a higher volume of total installs. Can he achieve it with partners that are doing click flooding?

Let’s see this graph that compares the total number of installs with all the clicks generated by the 2 partners generating a huge number of clicks: 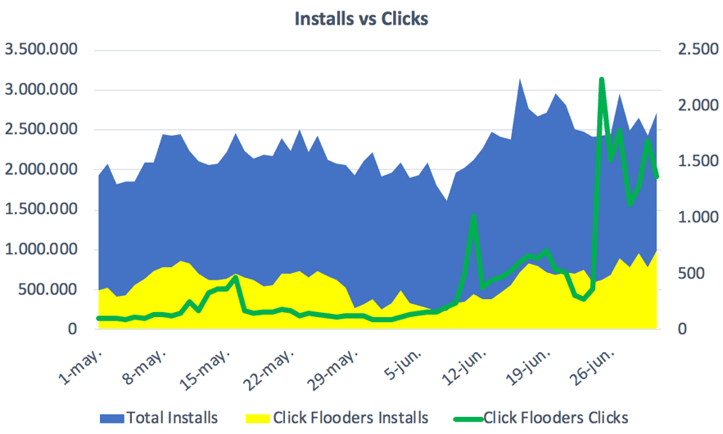 From the 8th of June onwards there is an increase in the total number of installs and we also see many more clicks from those 2 partners. There could be a correlation between those extra clicks and those extra installs, but to be sure let’s see more data.

How does the evolution of total installs look like when compared to the number of impressions served? 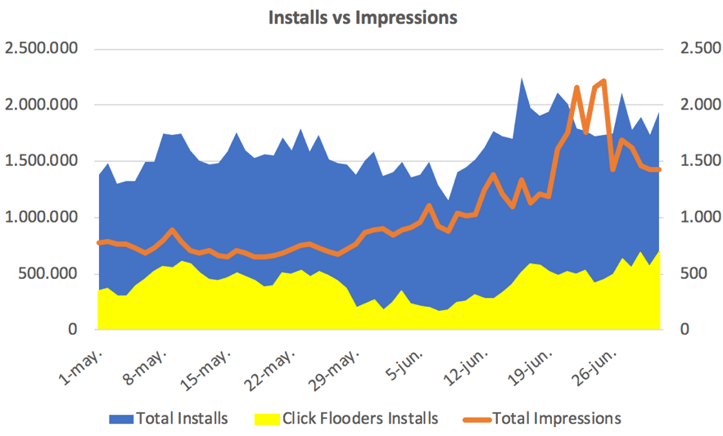 On that same period (after the 8th of June), impressions served had also risen, which can also help to explain why total installs have increased. Actually, there seems to be a clearer correlation between total installs and impressions, rather than clicks from click flooders.

Click flooders are expected to have a low assisted rate. They “generate” so many clicks from so many users that they are more likely to get conversions from other channels. They don’t generate value to the advertiser, as they do not generate new conversions – if they stop their activity, other channels and the organic channel would have a lot more conversions.

Indeed, the more clicks from click flooders, the higher the overall number of assisted conversions: 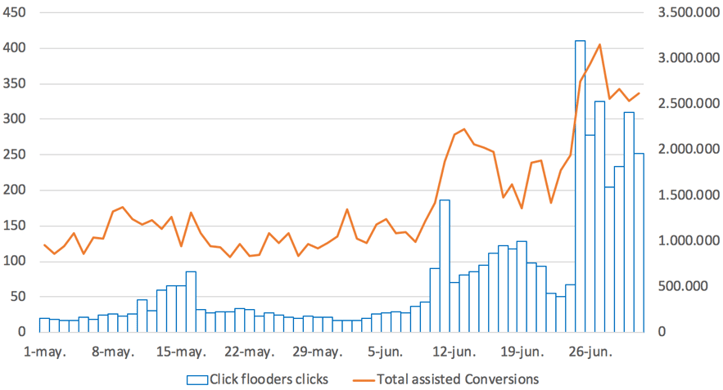 Now let’s see this same indicator from another angle: partner 1 has a low assisted rate of 16%. However partner 8, who is also doing click flooding, has an assisted rate of 61%. How is that possible? The explanation is related to the nature of their activity: in spite of the fact that partner 8 is getting conversions that should be attributed to other channels, partner 1 is more aggressive with click flooding than partner 8, and is “stealing” more conversions from partner 8 than partner 8 is “stealing” from partner 1.

Have a look at the evolution of the assisted rate and number of assisted conversions of partner 1 per day, during the months of May and June: 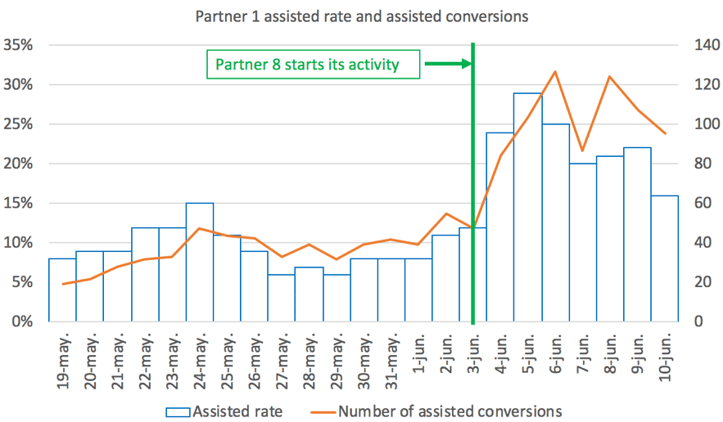 When partner 8 started doing click fraud (“stealing” conversions from other channels), partner 1 was also affected, and lost some of those installs – this shows that the activity of both of these partners impacts all the other channels, including each other. It also tells us that partner 1 has a more aggressive click flooding strategy, as its assisted rate is lower than partner 8 (16% vs 61%).

So, how does an advertiser reach true growth?

In this real case scenario there is no doubt that the advertiser is wasting part of its budget by investing in partners doing click fraud. Other customers in the same situation have already taken a few measures (ordered from the less efficient to the most efficient):

However, in order to maximize advertising investment efficiency, the ultimate goal of the advertiser is not only to avoid fraud but to understand what partners are generating added value. That’s where incremental metrics come into play: they allow you to not only see the number of conversions “attributed” to a campaign, but the number of those conversions that are incremental. In other words, incremental metrics do not take into account “results” that would have happened anyway independently of the campaign. You can see in more detail the importance of measuring incremental KPIs in this other article: eCPA is dead! Long live the incremental eCPA! 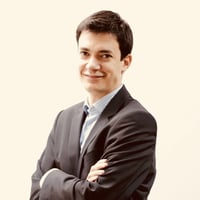