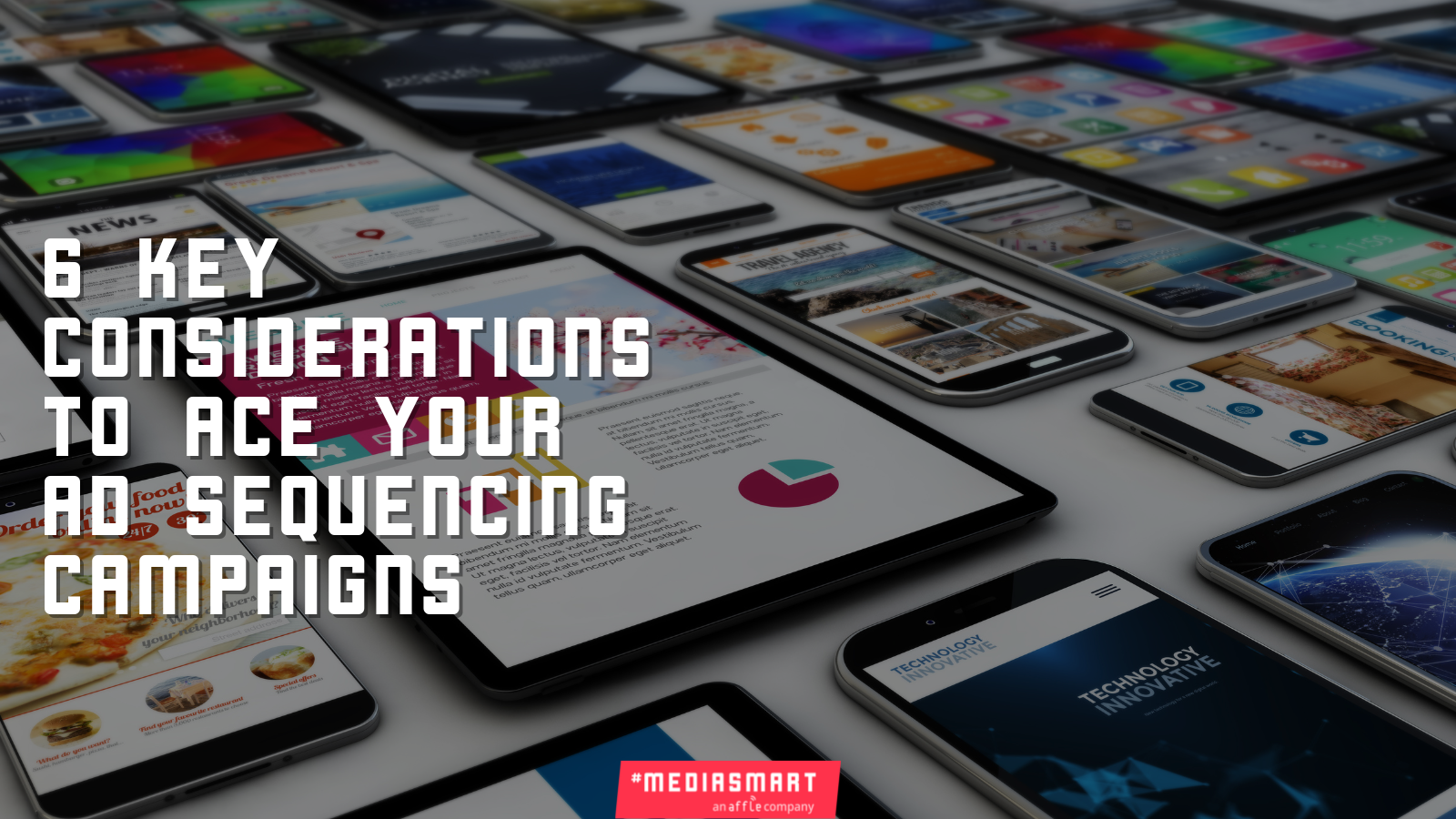 According to Forbes, in the last 50 years, due to the economic development and the surge of Digital Marketing, brand exposure per person has gone from 500 to 1.600 per person per day to 4.000 and 10.000 per day. It only takes a moment for a user to skip an ad on the screen. So how can advertisers keep being relevant to users and generate good long-term rapport? In mediasmart, we find that Ad sequencing can help maintain brand awareness longer and develop an emotional connection with your targeted audience.

Ad sequencing, in simple terms, means that a series of ads will be shown one after the other generating storytelling around a particular brand, product or commercial action. An Ad sequence can be as varied as the creative mind strategizing it. It could be used, for example, to reinforce a message, prompt an action using more engaging reminders, generate playful branding, accompany other marketing actions or events while they are happening, divide a complex narrative, etc.

Imagine you want to launch an advertising campaign made of five video series shown one after the other and build up a story. It goes from the introduction or exposition to the conclusion with rising action, climax, and falling action. That would be Ad sequencing. But you are not limited to a single format while doing a sequence of ads; it could be created using different ad types such as banners, native ads, audio, or video. The possibilities are endless.

The truth is that through its amplified narrative, Ad sequencing will prevent ad fatigue and provides users supplementary information (like a prompt to buy), starting precisely from where the previous message left them off.

This article will cover six areas you should consider before launching an Ad sequencing campaign.

1. Get a clear understanding of the expected campaign behaviour to reduce the risk of a broken-up story

When launching a campaign where actions have dependencies, getting a clear idea and even building a map of the actions you want the end-user to follow is vital. Options are endless, and having a clear view of the funnel means you won't forget any essential step along the way, and your communication strategy will be respected. We recommend you write down or generate a graph so that you can quickly check what the steps to follow are. This will also guide you when analyzing campaign results and checking if the automated optimizations are working properly.

In the same line of thought, you should have a clear idea of the campaign goals and which are the key KPIs you need to be tracking. For example, if your Ad sequencing campaign aims to generate app downloads, the key KPI will probably be 'app installs', 'sign-up' or 'log-in'. If your ad sequencing campaign aims to bring more people to your store or restaurant, the key KPI will be 'incremental store visits'. Suppose your campaign is a branding campaign that uses video to story-tell a product launch. In that case, you will be interested in video completion (or any other value like 25%, 50% or 75% of video completion). Again, having a clear idea of the goals will help set the correct tracking and attribution for an optimum result.

mediasmart has developed a tool called Strategies that can help you establish the placement and the funnel of your campaign. They will allow you to run different line items at the same time or progressively and manage budgets simultaneously. In addition, this will enable you to target the right users with the right message. In short, show the following ad to those who just saw the previous one, not others. This will tremendously reduce the risk of catching a broken-up story.

2. How to make sure you are targeting the right users to create an actual Ad sequence with interaction-based audiences

The foundation for Ad sequencing is to be able to retarget users that were already impacted. Once your first ad is shown, you will need to suppress those users that already saw your 1st ad from being served with it again, while you should target only the users that already saw the 1st ad with your second one. So on and so forth until the sequence is completed.

Our in-house solution: mediasmart's Interaction-based audiences (IBA) can help you automatically generate segments based on user's interaction with ads at impressions, clicks or conversion level of a given campaign. IBA enforces and/or suppresses given sets of users, automates a campaign's flow and allows optimum Ad sequencing in just a few clicks.

3. Make sure users are seeing your ad by measuring Ad Viewability

For a better user experience, ads usually are programmatically bought and loaded before they are shown on the screen. This means there is a chance your ad will not be displayed and therefore viewed by the targeted audience. How can you minimize the chance of that happening? By measuring Ad viewability and setting up targeting strategies that optimize towards it.

With mediasmart's viewability solution, the uninterrupted story flow is possible, keeping the ad sequencing experience consistent. In addition, real-time insights about the ad being viewed (AdViewed), loaded (AdLoaded), or some error (AdError) will allow the system to automatically adjust the strategy accordingly.

Make the most of a seamless implementation, fully granular real-time reports and optimization capabilities that mediasmart's viewability solution brings to hone your ad sequencing campaigns. In addition, interaction-based audiences being generated on Adviewed (as opposed to 'plain' Impressions) will ensure that users have seen each of the ads meant to be shown on your sequence before jumping into the next one.

4. Cross-screen ad sequencing, thanks to our Household sync technology

Speaking of jumps, would it be possible to generate an ad sequence and jump from one screen to another one? Definitely. Let's explore this theme through an example. Imagine you are a brand that has built an e-Commerce and wants to make the most of your advertising budget by generating storytelling around your offerings through a sequence of ads, as described below:

To go from step a to step b, our Household sync technology can automate your cross-device strategy, finding the users independently of what screen they are using. Compliant with privacy regulations, it allows you to make the most of three worlds: the storytelling on bigger screens, the interactivity inherent to mobile, and the natural measurability of Programmatic media buying.

Steps b to c would follow a more classical retargeting approach that can be done either with interaction-based audiences or an audience beacon placed on your e-commerce website.

When going from one step to the other, on top of planning and having a map, as we were discussing previously, the creatives themselves must be telling a story that makes sense. To engage potential customers and drive them to the next conversion stage, make sure that the creative can communicate its message effectively to your users. Moreover, a series of ad creatives should be more than just a reference to products; there should be a logical transition between these steps. Finally, we recommend you keep your user focused on the experience of the ad by not presenting any blocking or disruptive elements. This helps guide the user through a flow and prevents confusion or disinterest.

Light creatives, on the contrary, are ideal for a high-frequency advertising environment such as mobile. Keep in mind that light and cohesive creatives will work better because they will tell a story that makes sense that will be fully viewable, a multilayered experience.

6. Alternative identity solutions and relevance of the ads

After getting to this point, you are probably wondering what happens when it is harder to identify the user because we don't have access to their mobile ids or IP addresses (i.e. the impression is served on web traffic). News of a more privacy-centric approach to marketing, where access to identifiers is crippled, has swamped the industry.

Our Audience mapping solution and integrations with data partners such as Liveramp or Digiseg have you covered. As long as we have consent from the end-user, identifying users across environments to support Ad sequencing strategies is a possibility and a reality.

On top of that, our Contextual targeting capabilities will ensure you are serving ads in relevant contexts at every stage. The hyper-relevance achieved through contextual targeting will be vital to maximizing reach, improving the ability to identify segments while being privacy-friendly, and ensuring brand safety.

Even if the series of ads will vary depending on the creativity of the strategist behind them, it is universally acknowledged that a well-designed Ad Sequence will engage users, when least expected and convince them to buy your product or service in no time. To ensure you are using your budget efficiently, you should create a mind map with all the sequence steps. While building that, make sure your ads are cohesive and light enough. From there, ensure you are targeting the right users, thanks to Interaction-based audiences on viewed impressions, or identify users thanks to alternative identity solutions.

All in all, Ad sequencing is a powerful tool that allows you to communicate your message in a story-like manner, enhanced with visual elements that are contextual and relevant to your users' needs.

Contact our team for a step-by-step guide on setting up your Ad sequencing campaign!